Enjoy the Depth of the Distiller’s Art in Style!

​We lightly sand these staves so that they retain the character they have developed through years of use. The top portion of the flight board is actually the inside of the barrel, and still retains the char it was given when it was originally made. Two feet made of smaller staves are attached to the base to allow you to easily grasp and lift the barrel stave flight tray. They are finished with a durable organic oil/wax coat that will stand up to use and abuse while keeping the appearance close to the original condition of the barrel stave.  Each flight tray set will have a slightly unique look due to the nature of reclaimed material.

Made from Reclaimed Bourbon Barrels

Our first Whisky Flight Trays were made from Woodford Reserve Bourbon Barrels filled August 7, 2008. After that, they were used by Saint Arnold Brewing of Houston for their Divine Reserve #15. When all of the flight trays from this barrel are gone, we will select another barrel and share the details of that particular barrel with you. Since then we have used many different barrels from other distilleries and breweries.

When selecting "Glasses Included" your Flight Tray will include "3" Glencairn Crystal Whiskey Glasses. These tasting glasses were designed in Scotland by master distillers as the best way to enjoy a good whiskey. The narrow mouth of the glass encourages the "nose" of the whiskey to come through clearly, allowing you to pick out the different smells high-quality whiskey and bourbons will have. The wide bowl of the glass displays the color in an easy way judge. This is truly the whiskey enthusiast glass of choice!  This is the best way to gift this Whiskey Flight Board for the special whiskey drinker in your life!

I purchased this as a gift for my son's birthday. He loves it!! Thank you!!

It is such great work and quality

Very excited about receiving our boards! They look great! Thank you!

Appreciate it Jerry, makes the days being covered in sawdust and char from the barrel worth it!
M
M.D.

Our guest loved the look of the Flight Boards 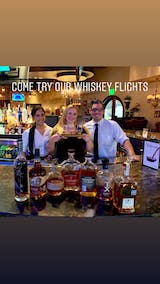 Thanks Mike, I am proud they will be serving up some of the finest whiskeys in Clear Lake!
123

More in this Collection